Don't get hysterical about hystiocytomas 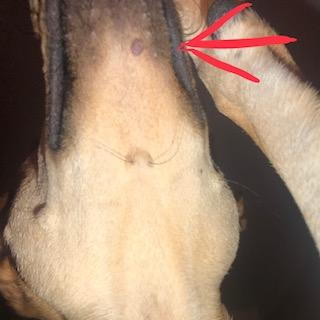 If you're a pet owner, there's a strong chance you treat your pet like one of your children or at least in the same way as you would a member of your family. Which means that any time they seem to be under the weather or you notice something out of the ordinary on them, you have a little panic attack. What's wrong with my pet? Is it serious? What's going on? Why can't you speak to me just this once!? ...You get it.

When this happens, it's understandable that you might hop on the phone and schedule an appointment at the PPAC ASAP. Dr. Silverman's middle daughter and her boyfriend are very much in the neurotic parent category. Every time their beloved pup Bernie so much as poops differently, they get right on the phone or text urgent pictures to Bernie's entourage of vets (and yes, Dr. Silverman and Mrs. Silverman also have a dog named Bernie—don't ask) of the pups' bowel business.

The most recent cause for their concern was the recent appearance of a brownish, circular, wart like object on Bernie's chin. It didn't look particularly angry or inflamed and Bernie wasn't bothered by it. But, as something out of the ordinary, Bernie's parents freaked out a bit and set up an impromptu photo shoot to get him to pose for the paparazzi shot seen above. They immediately sent it out and got a call back from Dr. Silverman the elder telling them that it looked like something called a histiocytoma, a benign growth that need not be worried about and that will go away on its own in 3-4 months.

Bottom line, if you notice something that looks out of the ordinary, similar to when it comes to your own health, it's never a bad idea to get it checked out. But, you should also not let your pup's little scrapes and scratches keep you up at night.