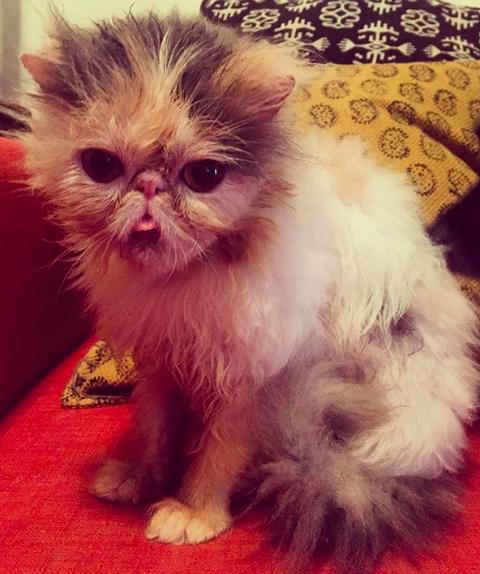 You may or may not remember my talking about the newest addition to Dr. Silverman the Younger's furry menagerie. As a brief refresh, her name is Aladdina and she's a Persian kitty who was found abandoned in the basement of a building on Plaza Street. When she came into the PPAC, she had a broken jaw, ringworm and couldn't eat on her own—she looked pretty rough.

She was put into isolation (ringworm is highly contagious and the folks at the PPAC didn't want her infecting other humans or animals!) and given lime sulfur baths to heal her of her ailment. On top of this, given her aforementioned broken jaw rendering her unable to eat, Dr. S. the younger took pity on the sad creature and took it upon himself to feed her via syringe—the only way to really get nutrition into her tiny body.  As you might imagine, this sort of bonding led to a firm attachment between cat and vet and shortly after beginning her treatment, Dr. S. the younger asked Dr. Bess if he could add Deeny to their family. She of course acquiesced.

After living with the two vets for nearly a year, they both decided it was time to do something about her quality of life—though they were incredible care givers, the poor kitty still couldn't eat on her own and was perpetually covered in cat food. On top of this, even with the syringe, she couldn't get more than a few bites of food in with each gulp. So they went to chat with the docs at VERG to see if anything could be done.

After performing a CT scan, they concluded that her jaw had been broken at some point and healed together in such a  way that the upper and lower jaw was fused. They decided that a surgery could rectify this by removing a piece of her jaw allowing her to chew once again.

The surgery was a success and the poor kitty can eat like a champ, no syringe needed! I for one am incredibly excited for her.