Don't put that pit in your mouth! 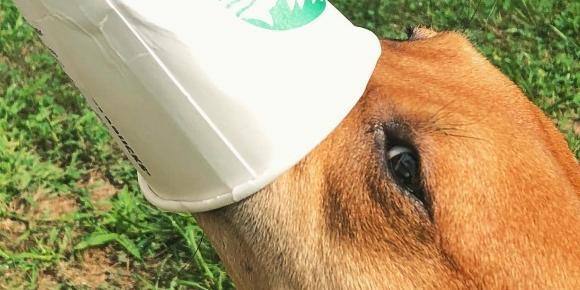 Oscar here.
We've all been there. You're just walking along with your pooch, minding your own business and BAM. You look down and they have a chicken bone or a potato chip or a pizza crust dangling from their teeth (worst case scenario, it's poop or vomit off the sidewalk). Dogs put pretty much anything and everything they see into their mouths whether or not we want them to. So as owners, its your obligation to make sure they don't eat anything that might harm them. Which means you kind of need to watch them like hawks.
But don't be fooled—potential risks can come from both inside and outside of your home. Just last week in fact, a 15 lb. mini Australian Shepherd came into the PPAC. Not 30 minutes prior, her owner had watched in horror as she consumed a plum pit that had somehow found its way out of the garbage and into poochy's mouth. Thinking fast, the owner realized that even something as seemingly innocuous as a plum pit would likely not be easily passed through the body of her tiny dog and they rushed to the vet.
In she and poochy came to the PPAC where Dr. S. administered something called apomorphine. Luckily, the dog had recently eaten her breakfast (so the plum wasn't making its way through her digestive tract yet), and out came the plum pit, fully intact. How do we know this? Well, Dr. S. had the lovely task of sifting through the dog's vomit to make sure the pit was present and accounted for.
It was and poochy is completely unharmed. That said, dogs can eat any number of items that can cause blockages or issues in their intestines. So whether you're out and about or in the supposed safety of your own home, keep an eye on what goes into your dog's mouth.
Til' next time,
Oscar